Sheena is a One Person co-founder and Director. She is a teacher at the Summerland Montessori School (B.C. Canada) which supports the Faraja Orphanage. 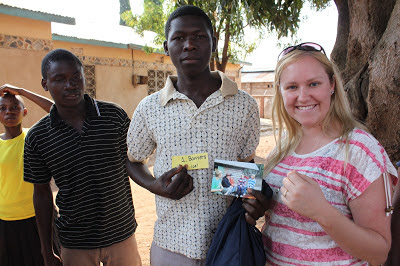 Most Tanzanian orphanages are not the traditional institutionalised facilities that most of us are familiar with.  Orphans tend to be absorbed into extended families or are taken in by neighbours. The extra child/children put a huge strain on the families who take them in, so the children spend time at an orphanage each day to receive care and food.

In this instance a group of women from the Isegehe area formed a committee and put money together to form the orphanage, which they continue to fund and run. The orphanage pays for the children’s medical and schooling fees, and sends soap and other valued items back to the foster-family to help decrease the burden of an extra child/children. 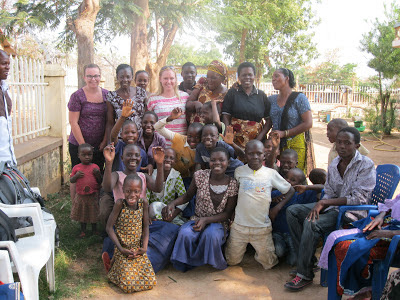 "In previous years we have sent money to buy the orphanage meat goats and pay school fees, and we sent them supplies in the crate sent last year. Since I was meeting them in person, families from the school put together bags for each of the orphans and I brought some donated money and the money from our recycling program to help them. I have been carrying all of the stuff with me all this time, and I was excited to finally be able to deliver it.

Of course, getting there was not quick and easy. The ride we thought we arranged didn’t work out due to an uninsured vehicle and despite numerous calls to a variety of people, we were stuck for a little bit as to how to get out there. Eventually Joseph found us a taxi driver willing to take us out there (it is in a village outside of Kahama) and we set off, with our 32 gift bags loaded up in the trunk of the cab. We had been unable to make direct contact with the orphanage yet, so first we went to the World Vision office, where someone else jumped into the cab to direct us to the orphanage. Through channels we are still not certain of, Scholastica (who runs the orphanage with the help of other ladies in the community) had heard we were coming and was waiting for us. 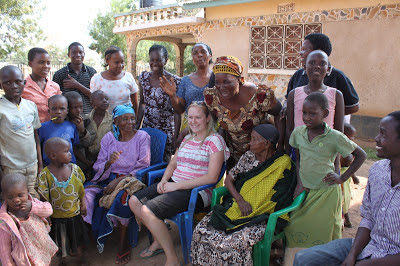 When we arrived, we were very warmly welcomed, with lots of hugging and hand shaking and hand holding and hugging and laughing and more hand shaking and cries of “Welcome!” Once Brenda explained that I was the teacher from the book we sent them last year, I was re-welcomed and there was even more hugging and hand-shaking and an elderly woman was kicked out of her chair so I could sit there! There were orphanage kids and random neighbour kids there and some of them were really breaking my heart! All of the people I have met so far here are very clean and tidy (which I find hard what with all of the dust and lack of water pressure!), but quite a few of these kids were dirty, with torn clothing, and bellies protruding from malnutrition. One little guy, a year old or so, ate a handful of dirt.

I only had stuff for the Orphanage kids, so Brenda and Joseph went to get food for everyone from the store. Mary and I stayed and, with Scholastica’s son Isack translating, made conversation with the Faraja ladies. They were very surprised that Mary was only 17, comparing her to a girl there who was 17 and asking, “Why do you look so much bigger than her? What are you eating over there?!” When Brenda and Joseph came back, we fed all of the children some bananas and biscuits. 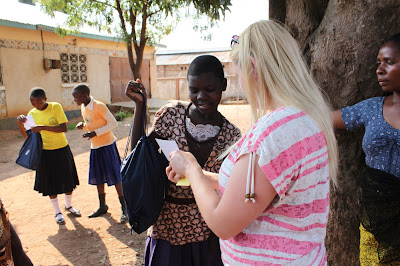 After that I handed out the gift bags and took pictures of all of the children. It was awesome! I brought pictures of the kids from my school to go with each bag and showed them to the children as they received their bags, explaining that that child sent the bag for them. It was chaotic and busy, but really great! Afterwards, we took more pictures and they all sang some songs for us. Then I discreetly gave Scholastica the money I had brought and after a lot more hugging and hand shaking and thank-you’s, we were off. I would have loved to have stayed longer, but our taxi driver was only willing to wait so long, so away we went! " 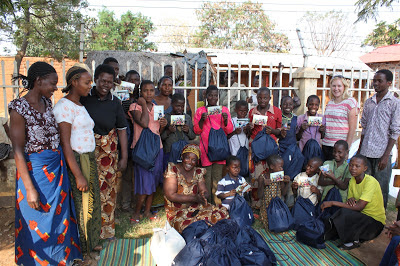 Thank you - from the children and youth in Kahama, Tanzania 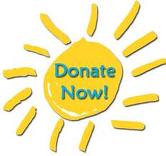 Click here if you would like to make an on-line donation or email us at info@theonepersonproject.org if you can save us the on-line fees and mail a cheque!

Posted by Denise Howie at 22:32 No comments:

Email ThisBlogThis!Share to TwitterShare to FacebookShare to Pinterest
Labels: 2012 Volunteer Trip, 2013 Volunteer Trip, Faraja Orphanage, Orphans, Personal Stories, Who we are and what we do

As an organization we strive to ensure that the support we provide leads to self-sustainability for the communities and organizations we have connected with and I am delighted to report that we are extremely successful in this, but being there confirmed that sometimes a quick-fix is also essential; and thanks to your donations we are able to offer both short and long-term solutions to families affected by poverty. 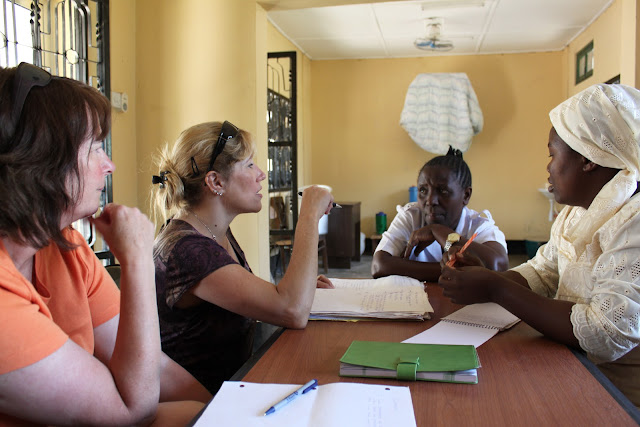 We visited with Philomena and Flora who run the Amani group, a social support group for children who attend a clinic at the Kahama Hospital for treatment of HIV/AIDS.

We always meet with staff, officials and organizations to ensure that we are providing what is actually needed and to monitor progress. The funds we raise allow us to ship donated items such as a TV and video recorder, toys and books, which make the waiting and treatments more bearable and will also encourage children and adults to attend for testing, education and treatment. We also ordered tables, chairs and shelves for the room – or clubhouse as the children call it!

We hope in the future to provide funding towards food for children who attend the clinic to receive antiretroviral (ARV) drugs as the highly-toxic medications cause severe side-effects if taken on an empty stomach.

In keeping with our belief that one community can help another at all levels, the wonderful staff from the Summerland Ministry of Children & Family Development have created the Friends of Amani Group, and write to the children and send gifts and supplies in the shipping container! 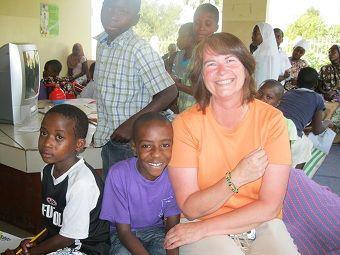 This is Jochim. His written and spoken English is excellent. Before he left he gave me the bracelet he had been wearing and said, "Please accept this little touch of Africa to remember me by." I didn't know whether to laugh or cry - so just grinned for the camera! 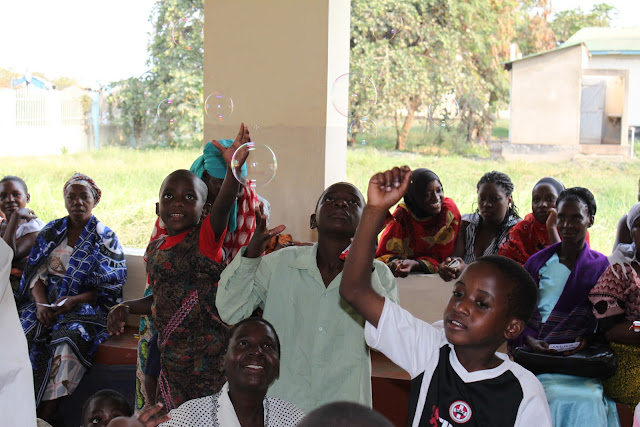 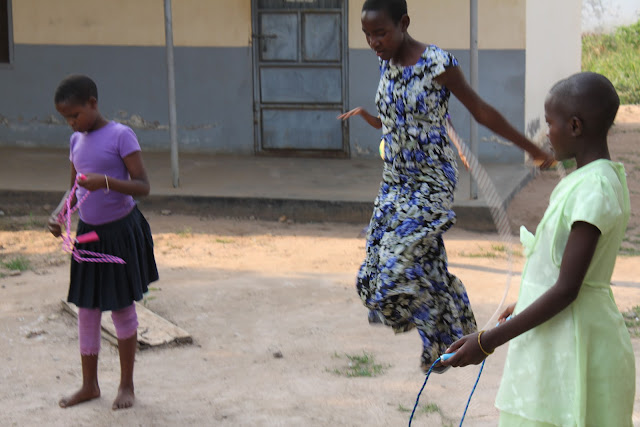 The children were delighted with the skipping ropes and soccer balls! 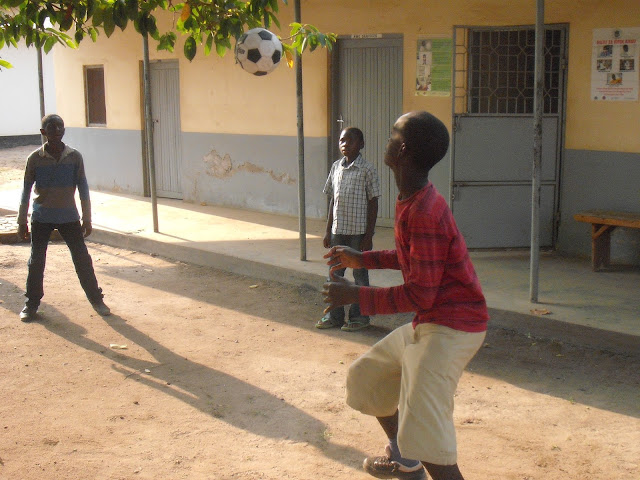 Further long-term support examples:
After discussions with the dedicated and resourceful Philomena and Flora we left US $200 to be used to create a women’s co-operative, where six or so of the mothers of the most vulnerable families will chose a project – poultry for example – and will work together to purchase and rear the chickens, which will provide both food and income for the families, who will eventually be able to donate a little money to the Amani Clinic and also pass on chickens to another group of mothers to create a second co-operative.
We have donated a sewing machine from the shipping container and will provide more so that the older youth can create sewing co-operatives. We hope in the future to provide funding for scholarships for school leavers to attend a nearby Sewing and Training Centre.

Short-term example:
We discreetly gave 30,000 Tanzanian shillings (US $20) to one mother whose children were very sick; her husband had left and she was unable to earn even the less-than-a-dollar-a-day that most Tanzanian families survive on. We were able to help her through a month or so, and with your help we can work towards creating a strong community, which will come up with strategies and solutions to eliminate extreme poverty.

With so much fun and laughter it was sometimes hard to remember why we were there.
A bitter-sweet day.

Click here if you would like to make an on-line donation or email us at info@theonepersonproject.org if you can save us the on-line fees and mail a cheque!
Posted by Denise Howie at 19:02 No comments:

Our Train the Teacher week was extremely successful!  30 Primary teachers from schools in and around Kahama attended the five-day course.

Heike spent months putting together eight sets of 30 books, pens, pencils, rulers, crayons etc. so that each teacher went away with resources to use in their otherwise empty classrooms. A major aspect of the week was that teachers were shown how to create their own resources.
﻿﻿﻿
This seemingly simple activity is the perfect way for the Kahama teachers to build a system for teaching English and understanding of concepts to their primary school students; days of the week and months of the year songs were incorporated, children can practice counting in English and have an understanding of today/yesterday/tomorrow and by adding colours and shapes the children can learn about patterns.

Heike, Sheena and Erin had a game plan before leaving but it very much depended on how many teachers actually attended and their level of understanding and speaking English. (Generally low.)  The first day went well and they were able to refine the structure for the rest of the week and present a series of activity based workshops where each unit built on the knowledge and skills of the one before to provide the participants with the tools (as well as the resources) to teach English in a way that will engage their students and ultimately lead to higher literacy levels for each community in our district. (Over time, with future Teach the Teacher Programs.)


Our donated books at the Kahama TRC. 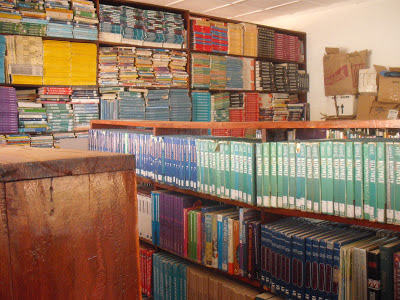 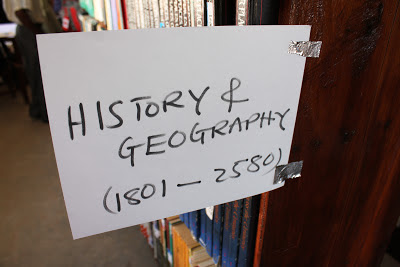 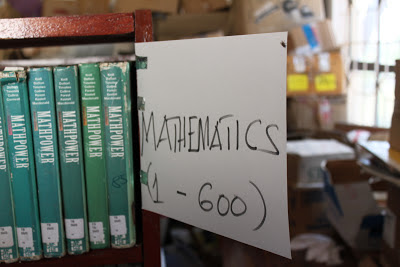 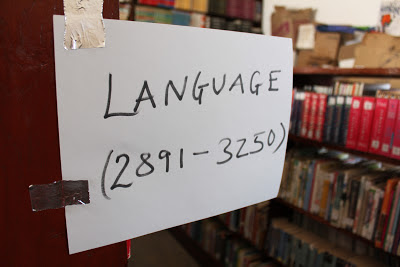 There are 120 schools in the Kahama Region. The Tanzanian Government has provided 5 Teacher Resource Centres for the area. Funds do not stretch to stocking them - or the schools.

Thank you to all those who sponsored a teacher - teacher photos and sponsor names are on previous posts. We received more sponsors than teachers so the remaining funds were used to purchase supplies for the teachers - many thanks to Jan & Al, Carol & Tom, Philomena, Angela and Chris & Leah.

Contact us for further details or to donate educational supplies or if you would like to make a donation towards education in Kahama.
Donate on-line
Posted by Denise Howie at 23:35 No comments: