At present there are two children with albinism at the Muvuma Orphanage Centre. Albinism is a rare, non-contagious, genetically inherited condition occurring in both genders regardless of ethnicity. There is a large albino population in the Kahama area who suffer from the stigma and prejudices of being different but more alarmingly, in Tanzania (as in many developing countries) there is a ‘trade’ in albino limbs as they are believed to have magical properties.

In 2011 Kulwa, a 15 year old girl with albinism was attacked in her village home by three masked men. They hacked off her arm above the elbow. This was only one of the 76 reported attacks since 2007, from which there are only 14 mutilated survivors. Even once buried, the victim's graves are desecrated.

Kahama District Council donated space for a new, larger orphanage (see April 12th blog) choosing land next to a school so that the children are not at risk of being abducted on their way to lessons.

People with Albinism (PWA) also suffer from widespread social discrimination, have poor vision and are extremely prone to skin cancer. The Tanzanian government and local bodies are trying to address the myths and discrimination, you and I can provide reading glasses, hats and sun block. 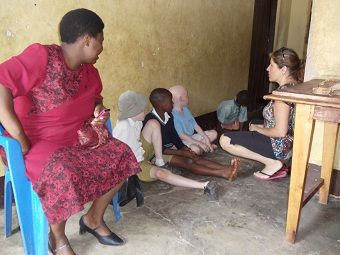 The new, larger orphanage will be home to up to 50 children, including children with albinism.
For more information or to make a donation contact me , mail to The One Person Project, 10108 Julia Street, Summerland, B.C. V0H 1Z5 or donate on-line