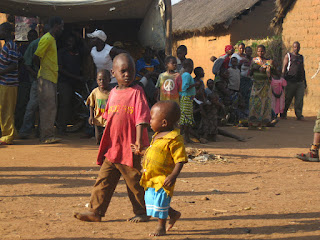 We are frequently asked about the effectiveness of sending aid to an African country: And before we set up the Society, the One Person co-founders asked the same questions – after all, the West has poured around a trillion dollars into the continent over the last 60 years (Dambisa Mayo - Dead Aid) yet per-capita, income today is less than it was forty years ago, and over 350 million people (more than 50% of the population) live on less than a dollar a day!


Cash alone obviously doesn't work, and we in the wealthy countries are disillusioned, especially when much of the money appears to be filtered off by corrupt governments and officials. But fortunately for us, humankind evolved because of its ability to persist and find another way.

As explained earlier in the blog, Brenda Lowe took part in a Canadian volunteer trip to begin to explore the problems and possible solutions in one community in Tanzania. In addition she and others in the group read numerous books and articles relating to the global fight against poverty, and strange as it may sound, we took courage from William Easterly’s attack on the humanitarian aid movement: The White Man's Burden: Why the West's Efforts to Aid the Rest Have Done So Much Ill and So Little Good.

Easterly writes about most aid projects being carried out by “Planners” who believe they know all the answers and provide what they think is needed. Successful projects, he argues, are carried out by “Searchers” who seek information and plan incrementally for the given situation, and are therefore able to adapt and act on feedback. This is a simplistic summary of a complex book, which has as many critics as supporters, but much of what he says fits in with our own ‘searcher’ beliefs and subsequent experiences.

Easterly gives the provision of mosquito nets as an example of the inherent weakness in just ‘planning’: when mosquito nets are distributed in developing countries they are often diverted to the black market or the nets end up being used as wedding veils or fishing nets! In Zambia for example, 70% of free net recipients didn’t use them.

The solution? Easterly cites clinics in rural Malawi that charge new mothers 50 cents for the insecticide-treated bed nets. In the bigger cities, the charge is $5.00 per net – which subsidises the cost of the rural nets.

Charging an affordable fee works – the program increased the nationwide average of children under 5 sleeping under nets from 8% percent in 2000 to 55% in 2004. Often the recipients do not understand the link between mosquitos and Malaria, but if you have been charged for a net you are more like to be given/listen to the information, and to use it for its correct purpose.

We recently found ourselves guilty of well-meaning assumptions: the Summerland Montessori School and members of the public had donated funds for us to purchase goats for the Faraja Orphanage in Kahama. So because milk is good for children, we ordered a herd of dairy goats – much to the horror of the orphanage leaders. Dairy goats would create many more hours of unnecessary work for the Faraja women; meat goats require less input and provide a better income – we quickly switched our order!

As a small grass-roots organization we communicate with the villagers and professionals in Kahama, and are developing a user-centred approach to help strengthen education and healthcare in the region. We endeavour to provide support for the present, which does not compromise the ability of future generations to meet their own needs, but instead provides a tangible foundation for self-sustainability.

When the children we support become the future doctors, teachers and leaders in their community, we will be able to answer questions of effectiveness more accurately, but for now the knowledge that vulnerable children and families are being given the means to change their lives for the better, is enough to keep us searching!

Overcoming poverty is not a gesture of charity;
it is an act of justice.
Nelson Mandela

Email ThisBlogThis!Share to TwitterShare to FacebookShare to Pinterest
Labels: FAQ, Who we are and what we do