This was the largest donation of items ever received in the Muhanga region so the TV, radio and newspapers came out to record the event. 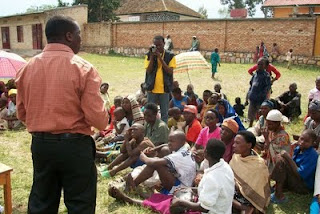 Ministry Officials and the Media

Thanks to families, businesses and organizations across BC we were able to collect and ship hundreds of thousands of dollars’ worth of items to the Muhanga region of Rwanda (2010)

Rwanda, known as the land of 1,000 hills, is a landlocked country in Africa’s Great Lakes region. It is the most densely populated country in Africa, with a population of more than 8 million people in an area of 26,338 square km. The country has received a lot of support following the 1994 Genocide but is still striving to rebuild its economy. Nearly two thirds of the population live below the poverty line.

The Muhanga Hospital and a clinic received 7 hospital beds, an operating table, an operating chair, microscopes, blood pressure machines and cuffs, wheel chairs, operating room equipment, general supplies and bedding hospital bedding and towels. The medical staff were particularly excited about the operating chair as there are only 2 or 3 of them in the whole of Rwanda, and they cost thousands of dollars, but every bandage, every piece of bedding contributes to the wellness of families in Muhanga.

We sent 16,000 books and 160 boxes of educational supplies, which were distributed to schools, the hospital and clinic and to children in the women’s prison. The schools also received 2197 soccer jerseys, 160 soccer balls, shorts, socks, boots and other sports equipment. We ensure that half of the uniforms go to the girl’s netball teams.

We were delighted to hear that a sewing school has been built and set up using sewing machines donated by people in the Okanagan (BC).


Find out what we need to fill our next containers. Or make a donation towards the shipping.