2012 Trip: Rwanda/ Muhanga/ Evariste and his family share their food with us

The  brick making volunteers were invited inside to have a late lunch, provided by Evariste and his wife (pictured by the doorway) to thank us for our help.  Lunch was cassava (a root vegetable) and beans.

Like most families in rural Rwanda, Evarist and his wife barely have enough food to feed themselves but they made sure that we were looked after. Brenda and previous volunteer teams have experienced this extraordinary generosity time and time again when visiting families in Rwanda and Tanzania. 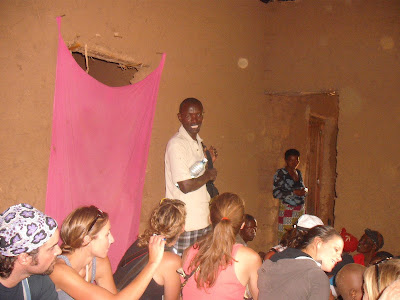 Costa and members of another volunteer group -
Groundwork Opportunities.

The family are part of a supportive HIV/AIDS co-operative set up by the NGO Costa is involved with, the Terimbere Rwanda Organization. TRO provides counselling and covers medical expenses for the family. AIDS is particularly prevalent in Rwanda as men infected with AIDS used rape as a deliberate weapon of war in the 1994 genocide. 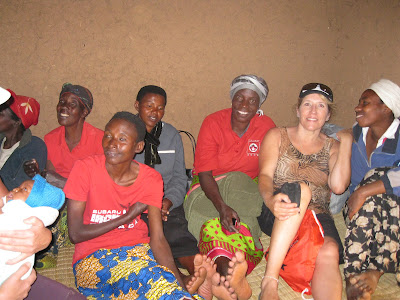 We were joined by other members of the HIV/AIDS cooperative. Note the Ironman Penticton donated shirts! 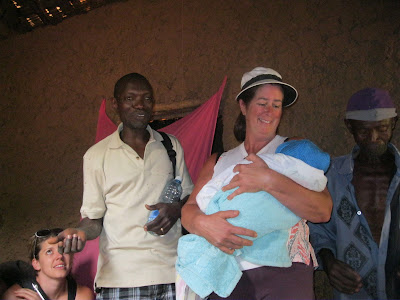 Erin and Evariste's daughter Pamela﻿
Pamela, who was three months old at this time, is not HIV positive.
I believe that this must be due to the medication that prevents mother to child transmission
(PMTCT)  but I will find out for sure and update the blog.

Acting as interpreter, Costa told us Evariste's story and explained the benefits of the HIV/AIDS support group. They have a pig co-operative, and thanks to your donations we were able to contribute to it on previous trips.

Costa spoke to one of the group, an emaciated woman named Epiphany, asking for her permission to tell us her story. Epiphany was widowed and turned to prostitution in order to earn money to feed her children. She felt great guilt at knowingly passing on the infection, but having lost two of her children she did not want the remaining three to starve. Costa told us that Epiphany had been to many counselling sessions before she talked about her actions but once she did she was able to begin to heal mentally and in spirit, and the opportunity to be a part of the pig co-operative meant that she no longer had to resort to prostitution.

It was at this point that Brenda told Costa that we were passing on donations of US$300 for the pig co-op. Costa turned to one of the older ladies and spoke to her, she clapped her hands and cried out, as did the rest of the group. Costa turned to us and said that this lady was in very poor health and was exhausted from having to walk to the market each day to sell homemade beer for little or no profit, and he had just told her "No more market. Now you can stay and help look after the new pigs."